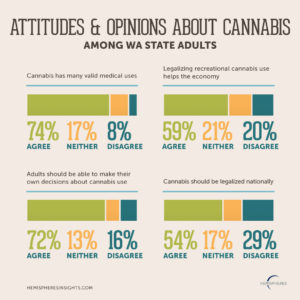 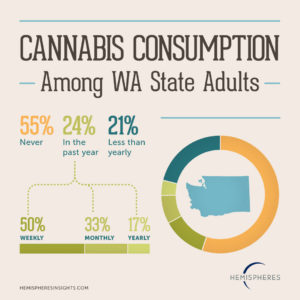 Almost three-quarters (74%) of Washington State adults believe that cannabis has many valid medical uses and 72% agree that adults should be able to make their own decisions about cannabis. Legalized cannabis is likely here to stay as 56% of residents would vote to keep it legal and only 28% would vote to make it illegal. (The rest are unsure or would not vote.)

Consumers of cannabis have more evolved views about what they are looking for in cannabis products and retail services.  They describe their ideal store or packaged product as being “natural,” “modern,” and “authentic” rather than “psychedelic,” “edgy,” or “exotic.” There is also a move to the consumption of newer forms of cannabis including food products, oils, lotions, and beverages.

This survey included 1000 Washington State adults (ages 21+) representative of the state’s population. It was conducted in November 2015 by Hemispheres: a customer insights agency offering a full range of marketing research and strategic consulting services. Their goal is to give companies the insight to truly understand customers as well-rounded human beings, resulting in a better ability to create products and services that inspire and delight. Hemispheres is based on Ballard Avenue in Seattle. The full report is available upon request.