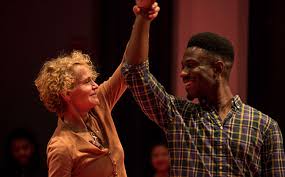 For the past few years, we have noticed a trend in our clients wanting to more empathetically understand their various audiences from customers to employees. Empathy is critical for us as researchers to develop a supportive environment where people are willing to share their stories. It also helps us to better understand their perspectives and how they experience their world. I recently participated in a play about empathy that gave me some fresh perspective on how we conduct research and what it is like to participate in our projects.

“The Fever” is a theater experience where it is difficult to determine which of the people are actors and which are audience members. About seventy people attended and sat in chairs in a wide circle. After some typical pre-theater chatter between the audience members, the lights went down and one person started talking from his chair about the story of this performance.

Over the course of the evening, individuals and sometimes the whole group were invited to step up to mimic others’ actions, dance, help people, walk around and sometimes run around in the space. In a vague way we learned that we had attended some type of party but that there was at least one stranger outside in the dark who was left out. At the end, an audience member was handed some index cards and read some reassuring thoughts. He then said it was over and we all cautiously rose and left the theater.

When the lights came back on, I was not sure what happened or what was intended, but it was fulfilling to collaborate with these strangers. I felt awkward at first, but then I became wrapped up in the experience. I’m relatively sure I knew who the actors were, but it was still scary to help one as he pretended to pass out onto the floor. I felt a growing connection with the actors and audience members as we built something together.

I’ve often used the theater as an analogy for focus groups. There is a script (moderator’s guide) and a theater building (focus group facility) and often a recording of the night’s performance. The big difference is that the audience (clients) are the same every night and often well-known by the moderator but the actors (participants) are unknown and often do and say unexpected things. This is the opposite of the typical performance where the actors are known, and the audience is unknown. As the director (moderator) we are putting on a show, but we don’t know exactly how it will turn out and we hope the audience (clients) will walk home satisfied.

In talking to Michael Silverstone, who along with his theater partner and wife Abigail Browde, wrote and acted in “The Fever,” I learned that they have a similar experience putting on this performance. They don’t know what type of audience will show up or how each show will exactly turn out. Regardless, they trust their rough script, the few actors who will spur the action, and themselves. They also trust the human desire to join-together, to help each other, and to strive for success regardless of what it may look like. I like to think that the same dynamic applies as we conduct our focus groups and put our trust in the random group of humans that show up to each session.

As an audience member of “The Fever,” I also gained a greater perspective about what our research participants experience. They are likely unsure of what they are going to be doing, who else will be there, what the goal of the session will be, or how they will feel after. Like the audience members of “The Fever,” research participants join the action, work together with other strangers, and most put their heart into sharing as much as they can. And in most cases, they walk out with a smile, new ideas, and a feeling that the experience was more satisfying than they had expected.